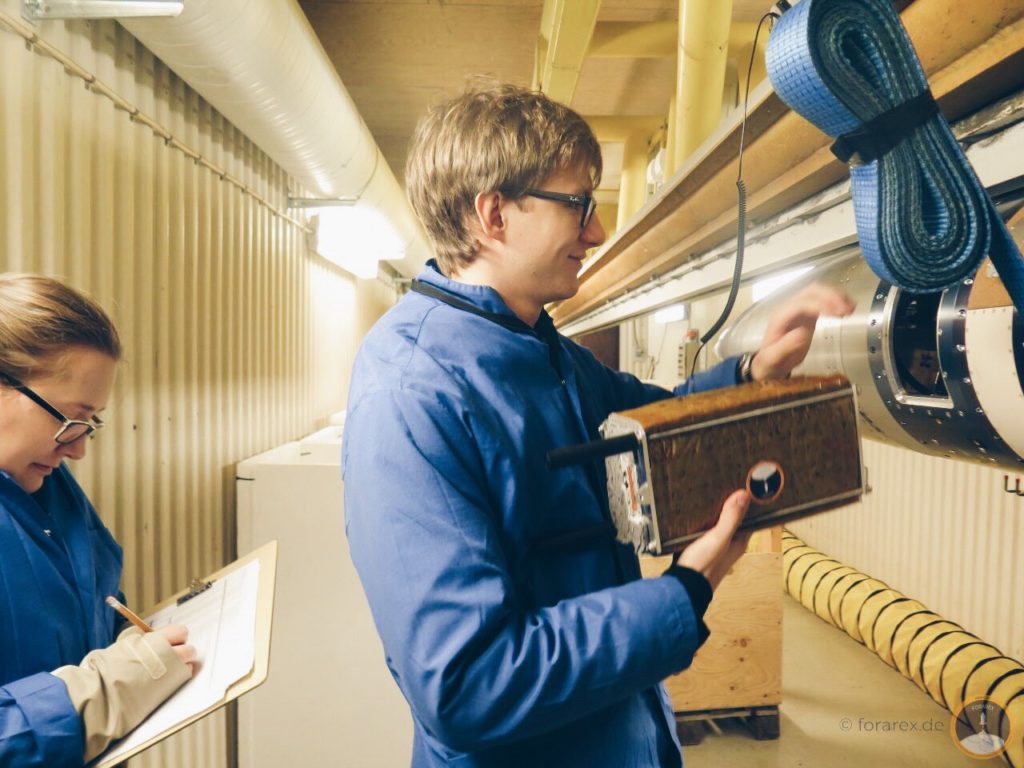 Our dream to examine the marine unicellular organism foraminifera under microgravity became reality on 11th march 2019. Our experiment launched towards space with REXUS 25 and landed approximately 2 minutes after that back on earth. Our team worked 18 month on accomplishing that.

Foraminifera are sensitive organisms. Ideal life conditions are crucial for the success of the experiment. We designed the FlowCell to establish those circumstances. Because our foraminifera Fibi and Thor could not be in the rocket for too long or too short, we needed late access to the rocket. After all the other experiments were already ready for launch, we still needed to access the rocket to put in our Late Access module. The rocket was already on the launcher with an assembled engine. As you can see in the picture in the Late Access module there is the FlowCell with the foraminifera as well as the water reservoir, pumps and several sensors and cameras etc.

One day before launch we had the opportunity to train the late access with a dummy, but nonetheless with the real rocket. After that we were ready for the hot countdown. Nils Kunst and Greta Sondej with the Late Access Module (gold). We also had to follow several security instructions and wear ESD-clothes. Greta is responsible for the Operation Check List. Every step was pre-agreed, trained and noted on this List. We also though about possible mistakes and wrote work schedules for those special circumstances to do the right thing in every possible situation. Nils is pushing the module into REXUS 25 on the right. Left: Late Access module with Fibi und Thor on board is in the rocket. Nils is screwing the hatch cover to the rocket. The mission was accomplished! The late access was done concentrated and successful and the rocket is finally ready to take of.

We filmed how we put our module into the rocket – enjoy watching it.

The Hot Countdown started! At 10:00 (UTC+1) REXUS 25 launched towards space. The rocket reached a height of 82 km. SSC broadcasted the launch via live stream. After a soft landing and a successful flight the recovery team started with a helicopter and collected our biological module. Our experiment is still running for 3 weeks, after that there will be some first results.

Congratulation on the successfull flight to all the people who participated at REXUS 25. It was a unique experience and we are happy to be part of it!